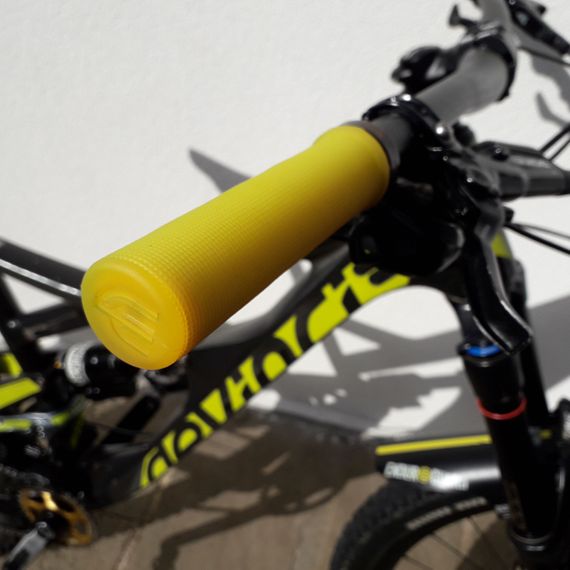 One of the things we like to do at Expanse Design is test our technological limits in-house. It is for this reason we decided to design and manufacture through injection moulding, some mountain bike handle bar grips.

We looked at an array of different grips on the market ranging from ergonomic and cushioned grips through to slim race grips. Due to our own interest in cycling we decided on the slimline race style. We wanted to keep the initial tests simple to minimise potential complications as well as keeping in line with the majority of race grips on the market. Once we had made the choice of grip style we then focused on materials in terms of durability, firmness and availability in small quantity orders. The grip was then designed with a medium to fine diamond knurl pattern for added grip and a concept 3D print was done to try on a bike. This was originally a proof of design, fit and feel only print but we decided to actually test this real world. With the test complete slight tweaks were made to the CAD model such as diameter and length as well as small detailing alteration. With that another print was done to check all alterations were as we wanted. Once we were happy with the overall feel we then started looking at creating the injection mould. There was certain criteria we wanted to follow due to the techniques we were going to be using to make the mould. The mould needed to be accurate which meant the size was important, it also needed to be durable and tough to be able to handle the various types of rubber hardness's that were potentially going to be pulled from the mould. The mould needed to work in terms of flow for the rubber to ensure no air was trapped in the rubber or mould and finally it needed to be relatively simple. Ideally no more than 3 parts to make up the mould. The reason for this was again to ensure accuracy of the mould when assembled as well as for how we were injecting the rubber in to the mould. We made the mould using our in-house 3D printers and checked accuracy of alignment and fit with all the mould parts. When the mould had passed quality checks it was then time to make some grips! We simply used industrial syringes to inject the mould with the rubber. Once the rubber had cured it was time to release it from the mould and fit it to a bike and go for a ride.

We plan on doing more in-house projects to test when can be done through using 3D Scanning, 3D printing and CAD Design so keep an eye out for our next in-house project coming up in the next few months.

Serving throughout all of the UK, Contact us today.